The Complete History of Jimmy John’s Marketing Slogans and Quotes

Jimmy John’s sandwich shop was founded in 1983 by 19 year-old high-school graduate James John Liautaud in Charleston, Illinois. Over the past 4 decades, Jimmy John’s has grown into a widely popular sub sandwich concept with 2,800 stores (including franchises) across the United States.

Opened with a $25,000 capital investment from his father, who owned 48% of the business, Jimmy John’s has become a household name in 43 states across thanks to their fast sandwiches and off-beat marketing campaigns. In 2019, the company was valued at $3 billion and Liautaud’s personal wealth was reported in Forbes to be around $1.7 billion. That my friend is a lot of sandwich sales.

From its earliest days as a small sub shop, JJ’s stood out with their unusual slogans, not the least of which being the consistent alliteration of being “freaky.” While the slogans have changed over the last 38 years since JJ’s was first opened, they are some of the most memorable in the annals of sandwich marketing history.

World’s Greatest Sandwiches – This was the original slogan of JJ’s, plastered onto a huge sign above the original shop in Charleston.

You buy. We fly. – We came across this as one of the early JJ’s slogans, which is no longer used in any advertising campaigns since being replaced by the “Freaky Fast” tagline in the early 1990s.

Freaky Fast. Freaky Good. – This tagline derived from the Trademark “SO FAST YOU’LL FREAK”, which was registered in September 1993 and discontinued in 2001. The phrase has been a major slogan for JJ’s from 2008, and is still in use today, despite JJ’s being sold.

“For years we’ve used freaky to describe our speed,” said John Shea, Jimmy John’s first CMO since 2007, who joined the company in 2017. “But freaky is really a way of life for us at Jimmy John’s.” 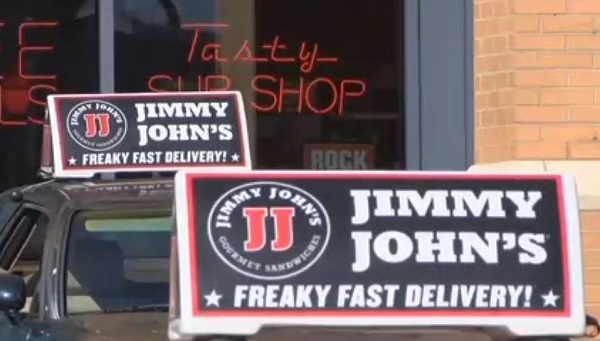 This slogan was canceled.

Following a (now dismissed) lawsuit against a Jimmy John’s franchise owner in Louisville, KY, local slogans on the top of the delivery cars were seen to have been changed to remove the “Freaky Fast Delivery!” tagline. Since the failed lawsuit, Jimmy John’s internal slogan in the Kentucky store is now “Fast on your feet, not on the street”.

It takes a freak to make a sandwich that’ll make you freak.

Serious delivery – A slogan often found on the windows of JJ’s stores across the country, the “Serious Delivery” tagline replaced the “Freaky Fast Delivery” in 2015.

Because sandwich – Used online, billboards, or the side of their shops, “Because Sandwich” is another slogan that highlighting the speed at which sandwiches are prepared for customers. This is also intended to spotlight the delivery limit of just five minutes from any store helping to prove the point of the larger brand ideal.

It takes a Freak to make a sandwich that’ll make you freak. – Written on the bags that all JJ’s food is delivered. 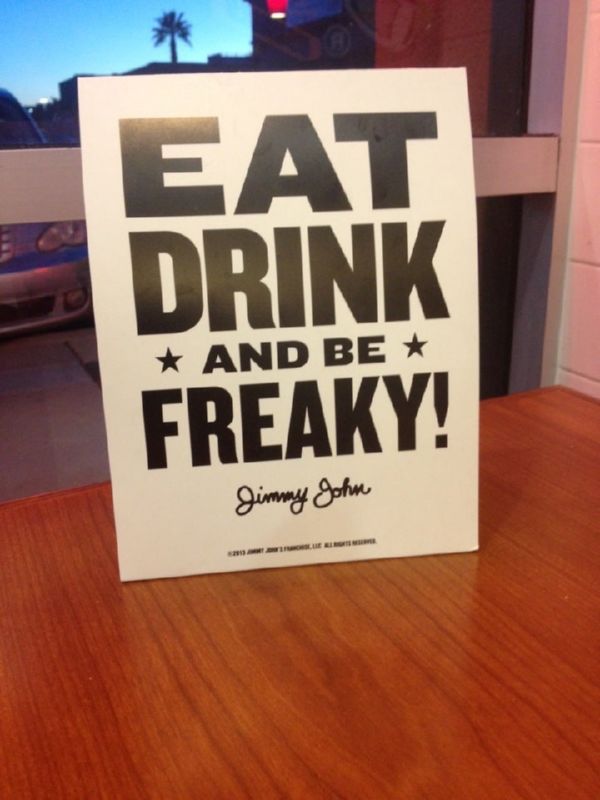 Eat. Drink. And be Freaky.

Subs so fast you’ll freak – The slogan seen on the back of many of the delivery drivers’ t-shirts and on the sticker labels for the subs, this is one of their popular marketing slogans that has stood the test of time. 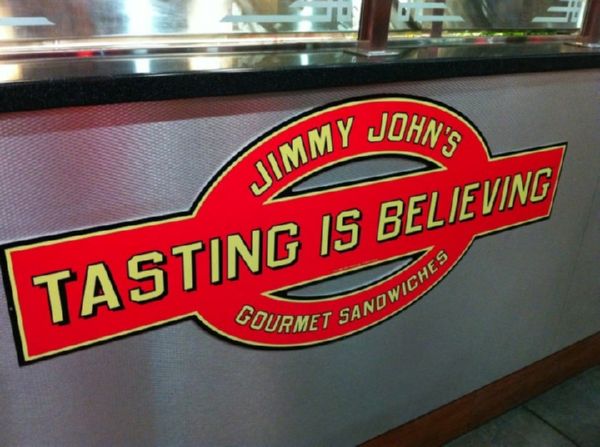 “Eat Drink & Be Freaky” and “Tasting is Believing” – Both have been used in JJ’s stores around the country as local marketing slogans. The photos below were taken at the store in Tempe, Arizona.

Often found printed on the counters, walls, and table flyers since 2005, these are less well-known slogans. 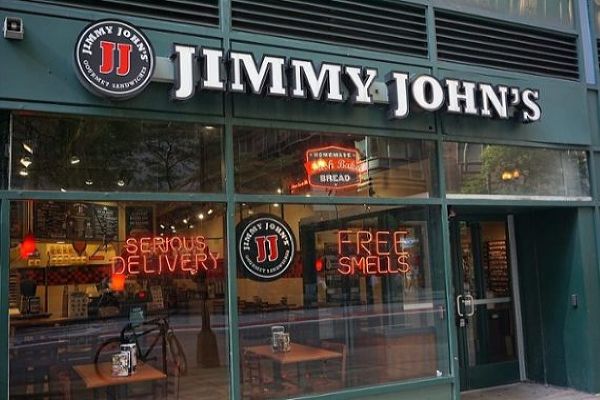 Outside a Jimmy John’s location.

Free Smells – The first slogan used by JJ’s (apart from the original Jimmy John’s name from 1983) is “Free Smells“, which dates back to September 20, 1988, and is the longest running trademark and slogan of Jimmy John’s.

“Free Smells” is essentially a catchy marketing slogan. It is designed to promote the tastiness of Jimmy’s in addition to the speed to cover a wider range of customers. Of course smells are free! You wouldn’t charge customers for smelling something delicious. And that’s the point right there.

The stores smell delicious, largely due to the fresh bread being baked throughout the day. “Free smells” is yet another marketing element that Jimmy John’s founder deeply understood. 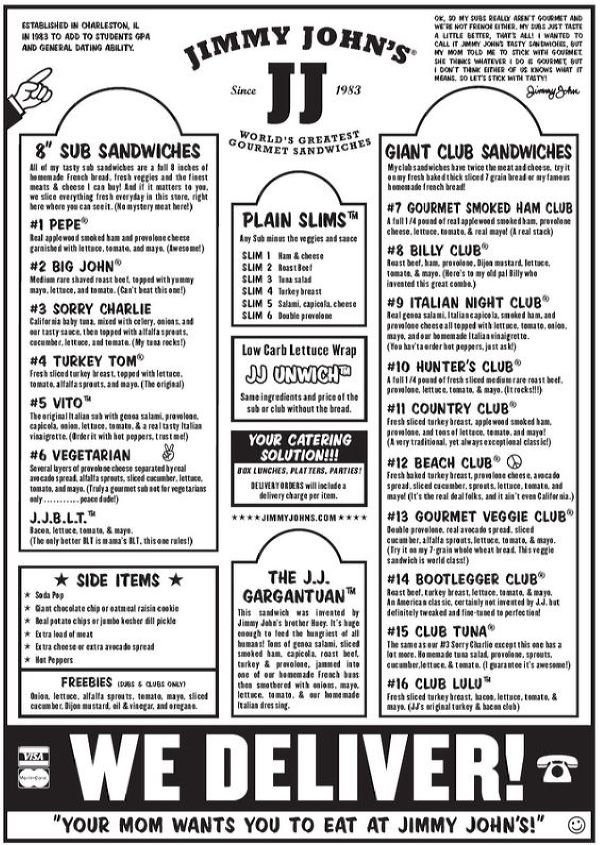 Your Mom wants you to eat at Jimmy John’s! – This could previously be found slapped on the bottom of all their menus, alluding to the “Approved By Mamas Super Seal Great Stuff” trademark that can be found on some of the brand logos. The slogan was registered in 1995, but discontinued with updated menus in 2020. 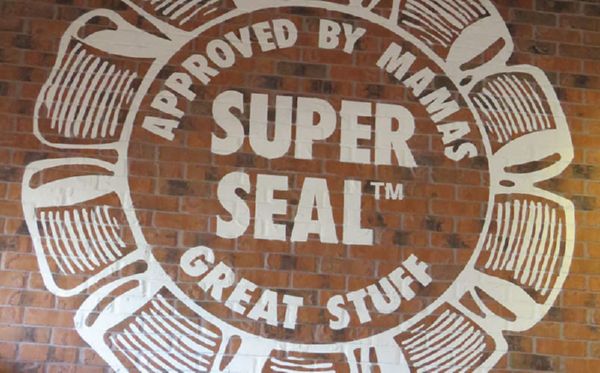 “I assumed when I was first selling the franchises that everyone would be as excited as I was to wake up in the morning to bake bread and slice vegetables.”

“I wanted all my stores to be the same, to offer the same customer experience, whether I was there or not.”

“I was at this fancy school, and I felt out of place, so I rebelled.”

“We want a system that creates the same exact sandwich, very rapidly and very consistently, every single time.” 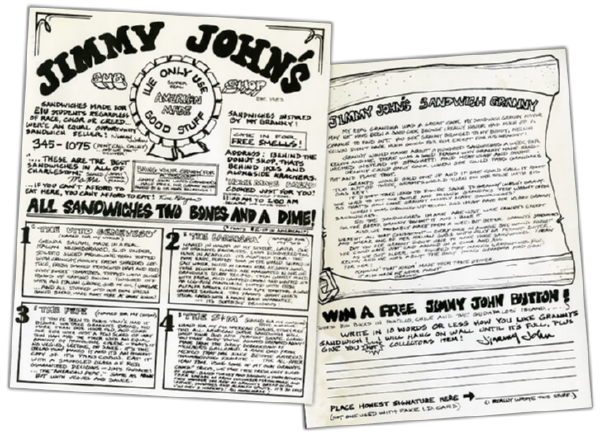 Giveaway Food – Probably the best marketing strategy in the history of Jimmy John’s, the first real marketing campaign actually began when the first shop opened in 1983. According to legend (mostly told by Jimmy himself) he loaded up with as many sandwiches as he could carry and prowled the streets around the local college, handing out food to hungry students from the Eastern Illinois University, where he had previously spent one semester.

The following days he did the same, charging “two bones and a dime”, which translated to $1.10. The local college students loved the low prices and started frequenting the shop.

University Delivery – While not an actual marketing strategy, Jimmy John started delivering his sandwiches (which only came in four options) to the Eastern Illinois University dorms for the students, after bringing samples to the dorm rooms door-to-door. Delivery was provided out of necessity due to the poor location of the first store. The simple promotional idea worked wonders.

In 2005, JJ’s used the voice of American stand-up comedian Mitch Hedberg in two of its video commercials. The first takes the stance that Jimmy John’s deliveries were so fast they were likened to race cars, with two guys cheering on the drivers from the side of the road. The second making claims that Jimmy John’s sandwiches being “an honest 8 inches – even when its cold”.

In 2014, the ad campaign from JJ’s catered to the “shellshocked mom” market and featured a mother of multiple kids on a day out getting some much-needed relief when she stops the car at Jimmy John’s Drive-Thru. Watch the commercial in its entirety below.

Free Smells has been a silent advertising campaign for decades, with the fluorescent “FREE SMELLS” signs in the windows. However, in 2014, a campaign brought the idea to the screen, with a range of Free Smells commercials.

2014 also saw a rise in their “Subs So Fast You’ll Freak” campaign. The campaign included ads that saw the staff serving up the customer’s orders before they got their credit card out, as well as finishing the customer’s sentences when making their orders.

2015 saw a another twist of the concept with the “Freaky Fast” campaign that included a montage of store employees working to quickly to get their orders out in time. This was set to the tune of a little girl screaming “freaky faaaaaaast” for the entire duration of the commercial.

In 2016, Jimmy John’s released their mobile app for both Android and iOS. Advertised as the fastest way to order a sandwich, the campaign included several TV ads showcasing how fast the orders were delivered with the new technology.

2018 also saw the introduction of the “freaks” that worked in the stores. A campaign that showed the different jobs that people did at Jimmy John’s. The series made claimed they were all “freaks”, just a different kind of freak. The ads included the “lettuce freak”, who sliced lettuces into the perfect 3/32nd inch-wide strips required for a JJ’s sandwich.

In March 2019, Sandwich Delivery Zones were the latest marketing campaign based around limiting delivery to maintain a satisfied customer base. The focus of one of the largest national marketing campaigns from JJ’s to date, the ads targeted individuals inside their delivery zones, providing a five-minute delivery zone around all its 2,800 stores. Marketed along with their Fresh When You Need It Fast advertising, the campaign proves their obsession with delivery.

August 2019 saw the opening of the the “Home in the Zone” Contest, which was designed to give one super fan a up to $250,000 towards the purchase of a home in one of JJ’s Home Delivery Zones so they can have JJ’s delivery to their house. Released hot on the heels of the Sandwich Delivery Zone campaign, the contest was open to fans who lived outside one of the Sandwich Delivery Zones across the country. The contest ran until October 4, 2019, with a total of 226,000 essay entries, the winner chosen was Tania, an occupational therapist assistant living in Honolulu. Congratulations Tania!

JJ’s marketing campaigns have also been seen by millions on Facebook, Instagram, and Twitter, with regular posts and tweets being made on their digital platforms. There’s also a blog on the JJ’s Blogger site, they have their own YouTube channel, and the JJ’s Mobile App is available for Android and iOS for their loyal customers so you can keep up with all their latest marketing ideas there.

In October 2019, three years after the Roark Capital Group bought a 65% major stake in the company, their Inspire Brands holding company announced it had acquired the entire company, and Jimmy John Liautaud stepped down to enjoy retirement. We hope the founder keeps his freak flag flying high even in retirement.