Dunkin’ Donuts is one of the largest coffee shop and donut shop chains in the world with over 11,000 stores in 41 states and 36 countries. Aside from its donuts, the store’s coffee offerings are considered better than Starbucks by many. Just how famous is Dunkin’s coffee? On average, Dunkin sells 30 cups of coffee every second adding up to 1.7 billion cups a year.

If you want to know more about Dunkin’s success, how it got to where it is now, and the parts where the brand can do better, I’ve prepared this SWOT analysis to show you Dunkin’ Donuts strengths, weaknesses, opportunities, and threats. I’ve even outlined specific threats related to inflation that I believe is misunderstood by management.

Grab your favorite jelly-filled Dunkin’ donut and coffee and get yourself comfortable. Let’s take a look at the SWOT analysis for Dunkin’ Brands. 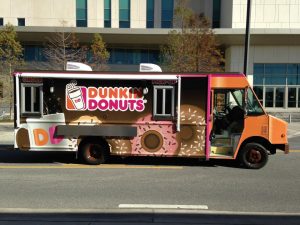 Side view of Dunkin’ Donuts truck.

Dunkin’ didn’t rise prominence for no reason. There are literally of thousands of donut shops operating in the United States. Here’s what sets Dunkin’ apart from everyone else.

Global Operations – From Asia to Latin America, and every country in between, Dunkin’ made its presence known to different parts of the world and has experienced growth in the international market. This has given them a better opportunity to attract more customers and increase revenues to more than $1.37 billion. Currently, they have 3,200 international restaurants across 36 countries.

Perfect Positioning – Breakfast has always been associated with Dunkin’. Many people start the day with one of their breakfast sandwiches and a cup of coffee. Over the past couple of years, fast-food companies like the CEO of McDonald’s has noted that breakfast will be the growth driver for sales in the company. Breakfast represents about 40% of McDonald’s revenue at the time of writing.

Of course, Dunkin’ is already a category king for breakfast. They company also expanded their breakfast menu to include hash browns, muffins, sandwiches, sausages, as well as eggs & cheese, to name a few. Remaining laser focused on mornings has helped Dunkin’ establish dominance for breakfast before it became trendy for other fast-food giants to get on the trend.

Strategic Branding – The company has always built a strong branding that is rooted in their beliefs and what they want their customers to feel about them. Even decades after it was first founded, Dunkin’ continues serving its market while living up to its mission to provide customers with high-quality coffee and donuts.

They believe that sticking to the basics while making it better helps them stay relevant among the market and industry changes that happened throughout the years. What’s more, is their consistency in coming up with strategic measures to ensure that their branding resonates with their target market.

Great Supply Chain Management – Dunkin’ has been very consistent and effective in their supply chain management which helped them ensure the timely delivery of their products so it doesn’t interfere with customer orders whether dine-in, take-out or online delivery.

Back in 2020, it was reported that Dunkin’s parent company Dunkin’ Brands, Inc., signed a long-term supply chain deal with NDCP to be the exclusive supply chain provider for all Dunkin stores in the US. As we’ve all learned the past two years, logistics and supply chain is essential for a food business. If you can’t get the coffee and donuts to your store to sell, you can’t operate and turn a profit.

The agreement also benefits new, existing, and future franchisees by providing them with uniform product costs, resulting in significant cost savings, and a higher level of service. 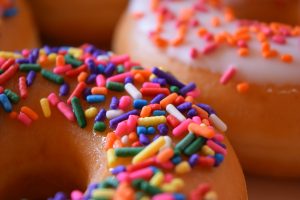 Dunkin’ has grown into a globally recognized brand. But that doesn’t mean there aren’t challenges and weaknesses for the brand.

Over-reliance on US market – Dunkin’ generates more than half it’s revenue in the United States. There’s no question on Dunkin’s popularity in the United States with New York having the highest density of Dunkin’ stores, representing 15% of all Dunkin’ locations.

While the United States market has proven to be the most reliable in the world, if the country slips into a recession, revenues for the company could be impacted negatively.

They’ve seen Dunkin’ success in countries outside America so the company knows they can market to other countries well, but they’re not making the most of this opportunity to make it as big as they are in the US so that more of their revenue would come from locations around the world.

Slower expansion – Although Dunkin’ has stores in many countries across the world, it has not expanded as fast as other brands such as McDonald’s and Burger King. The slow-paced expansion gives competitors a higher chance to dominate certain locations or areas before they are able to do so. Brand awareness and first-mover advantage is a real thing with in the fast-food industry.

If they can be more aggressive in expanding to different locations and countries, it can make Dunkin’s local and global sales a lot more impressive.

Poor targeting outside the US – What may have worked in the United States may or may not work for other countries, especially in emerging and lucrative markets like India. Although the company has made it big in South Korea, it wasn’t the same happy ending in India. Dunkin’ is considered a premium brand in India that offers products priced at ₹600 where the majority of people are earning below-average salaries.

Their poor understanding of the non-American market can cost them millions of dollars if they don’t change their strategies to make the brand more ideal for the market they’re trying to win.

Lack of variety – Relying primarily on coffee and baked goods, Dunkin’ is slowly losing the game in the fast-food industry as competitors continue to surprise the market with a variety in their offerings. Although I mentioned that focusing on a small niche made them go big, streamlining their offers also means they are limiting the number of customers they could’ve marketed to if they didn’t cater to a specific sector.

While it’s great that they’re doing pretty well being one of the well-known chains for donuts and coffee, it wouldn’t hurt the brand to dive into other product offerings so that is not very limited to a certain market. Having an established brand with a good reputation means it would be a lot easier for them to introduce other products to either attract returning, new customers, and a different target market. 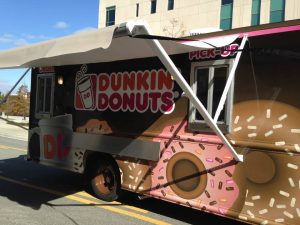 The canopy is up on the Dunkin’ Donuts food truck.

These opportunities can help propel Dunkin’s popularity even further. The company obviously has potential and is doing great in certain areas in the market. But if they want to make it bigger and grow stronger than its competitors, they have to look closely into the opportunities that can benefit them in so many ways.

Offer healthier options – The pandemic pushed people to become more interested in eating healthy and having a healthier lifestyle. Although this doesn’t mean totally breaking off from sweets and snacks, offering healthier options would likely attract more customers for fast-food chains like Dunkin’. Other restaurants like McDonald’s and Wendy’s are already offering a healthy menu to cater to health-conscious individuals.

Aside from considering those who choose to eat healthy, adding healthier options to the menu gives customers more choices and variety too.

If there is demand, there can never be too many stores. They’ve done a pretty good job getting into South Korea where they even adjusted their donut menu to include an ingredient that’s popular in the country. They’ve done to other countries too. This is a great strategy to allow the local market to slowly open up to the brand while still making sure that they still offer what made them popular in the first place.

Diversify revenue streams – By focusing on putting all their income generators in one sector can be worrying if that specific sector starts to decline. Dunkin’ has created a diverse revenue stream of food and beverages to sell. Some of these you may not have associated with Dunkin’ before:

As you can see, Dunkin’ plays in a lot of different major food categories and they could expand even further if desired focusing more on dinner or late-night food items.

Offer more variety – Focusing on just baked goods and coffee limits Dunkin’ to expand its market. By offering more variety to their already lacking menu, they are giving other people a chance to try their products and a chance to gain new customers. They can add different meals on the menu that are suited for breakfast, lunch, or dinner. 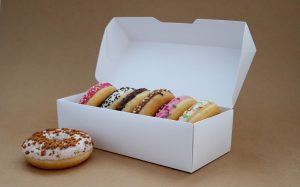 A donut in a simple white packaged box.

If companies like Dunkin’ fail to study and take action on these threats, the company could lose market share.

Intense competition – Strong competitors like Starbucks, KFC, McDonald’s, Burger King, and Pizza Hut put Dunkin’s profits and market share under threat. Since considering itself as a fast-food company, Dunkin’ faces the threat of intense competition in the market with big brands fighting continuosly to be at the top of their game.

If Dunkin’ continues to plunge down from the top, it can greatly affect the company’s profits and market share, ultimately, affecting the whole company.

Inherent issues in franchising – One of the biggest challenges of Dunkin’s franchising is the labor shortages. According to a report, some franchisees have about 60% to 70% of employees to help run the business. To solve the issue, Dunkin’ streamlined its menu to make it less complicated for the staff to operate the store. They also believe that this will help franchisees train people faster to help reduce labor turnover.

Increase in health consciousness – Even before the pandemic, there has been an increase in the percentage of people who are choosing to eat healthily. With more and more “green”, healthy restaurants and cafés opening, it has fueled the public, even more, to try eating healthy. Even more, the effect of the pandemic has made people more conscious about what they’re eating to try and combat diseases and illnesses. One way Dunkin’ can continue attracting new customers, even those who are health conscious is by offering healthier options.

Related Reading: 163 “How in One” Donut Shop Name Ideas

Rising costs –  This issue is not exclusive to Dunkin’ itself but to all restaurants in the food industry. Back in 2018, CEO Nigel Travis mentioned that they raised prices to make up for higher labor costs. In October 2021, food prices are up 5.3% compared to the previous year. Aside from those, supply chain distributions and higher demand for food caused by the pandemic are also driving factors to the increased costs.

Global pandemic and recession – There has been a decline in the economies globally because of the effect of the pandemic, not to mention, a lot of countries are already in recession before this happened. It is a continuous threat to the food industry and no restaurant can escape it.

Founded by Bill Rosenberg in Massachusetts, in 1950, Dunkin Donuts started with the goal to ‘make and serve the freshest, most delicious coffee and donuts quickly and courteously in modern, well-merchandised stores. After 5 years, Dunkin opened its first franchise, and just 10 years after, the number of Dunkin stores grew to over 100 shops.