If you’re interested in joining the terrifying world of the restaurant business, adding a buffet to your town or city’s restaurant options may be the right fit for you. From a customer perspective, buffet restaurants are a no-brainer: There’s a huge variety of choices to support even the pickiest eater in a group of diners, and the value of food relative to the meal’s low cost seems to be off the charts.

With origins in the Swedish tradition of “smorgasbord,” an early 20th-centruy spread of meats, cheeses, and similar appetizers, buffet restaurants today have expanded to include nearly every type of food imaginable, from Chinese to Indian to pizza. But how can an “all-you-can-eat” restaurant possibly work, from a financial and food cost perspective?

They key to a successful buffet restaurant lies in its inherent ability to keep staffing costs much, much lower than in a traditional restaurant. Think about the last buffet restaurant you went to: You were probably greeted by someone at the door, then shuffled off to a table somewhere and served a drink. Chances are, that was the last point of contact you had with your server, until it was time to pay the check, which you may have even walked up to a cashier at the end of your meal. This allows buffet restaurants to operate with much less in the way of waitstaff and table bussers, since you, the customer, are doing most of the work yourself.

Staff is often similarly lean in the back of the house. Because food isn’t cooked to order, and there’s almost zero chance of a customer sending something back to the kitchen to be re-fired, chefs in a buffet restaurant can focus on creating large portions of the same dish, and then presenting them under a heat lamp for service. There’s very little “on the fly” cooking, which allows the kitchen to operate with fewer staff members. 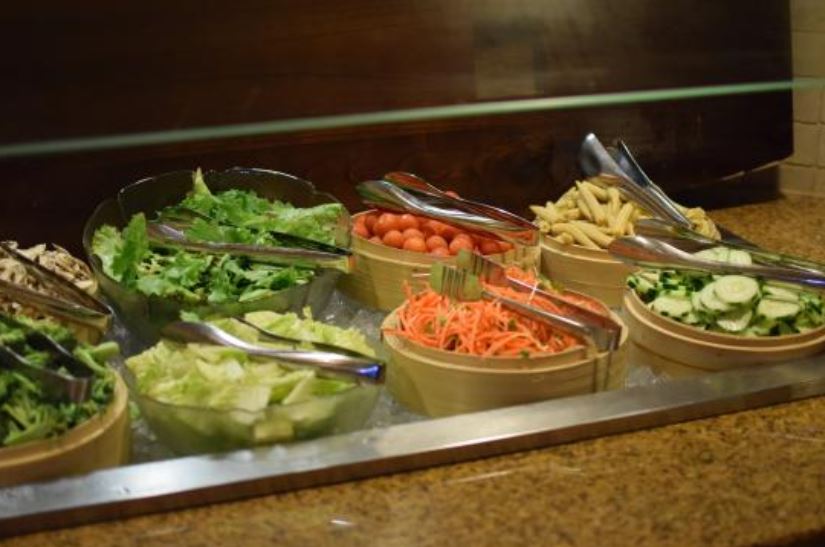 What About Food Cost?

Letting customers eat as much as they want seems like a surefire way to send your food costs soaring, doesn’t it? It doesn’t work out that way, most of the time. Sure, every group of diners will have one or two “supereaters,” who view a buffet restaurant as a challenge to their virility and will fill plate after plate with heaping piles of crab legs, as you watch your retirement plans slowly circle the drain. But most of these groups also have a few pickier eaters, who help balance out the needs of those gastrointestinal overachievers. Waste is also phenomenally low at a buffet restaurant, and may be as low as 5% for some successful businesses. Keep in mind that you need to work to get food waste this low, however. Some buffets in the hotel industry waste a staggering 50% of their total food according to Forbes!

With low labor costs and low food costs, what’s not to love about the buffet business? Of course, you’re not limited to the same-old, same-old, when it comes to dreaming up a concept for your buffet restaurant. Here are some lesser known, yet incredibly lucrative alternatives to consider:

Pizza Buffets
Pizza buffets are an under-utilized segment of both the buffet and the restaurant business, and we can’t quite figure out why. Combining extremely high margin food with low staffing needs makes a ton of sense, and from a consumer perspective, the notion of eating one slice of pizza from every kind you can imagine is extremely compelling. Pizza buffets can also be a great solution for existing restaurants looking to improve their lunchtime numbers, as well.

According to this report in Pizza Today, there are some specific customer profiles that are attracted to this eating option:

1.) Workers: Employees with short lunch breaks of an hour or less, don’t have time to wait for a typical sit-down lunch to be prepared. Instead of heading to a burger joint or Taco Bell, workers can visit a pizza buffet and be in and out quickly.

2.) Families: It’s a timeless truth… Kids continue to eat pizza no matter what generational category they fall into. There’s plenty of options and no waiting either. This is something both the parents and kiddos can agree on.

3.) Sports Teams: Year round there’s some type of traveling sporting event going on for kids of all ages: Hockey, baseball, basketball. One of the best values for coaches is to feed their group of athletes to an all-you-can consume destination.

Of course there are some chains that have recognized the opportunity of this offering for decades. One example is Pizza Hut that features a pizza and salad buffet from Monday – Friday. Another franchise opportunity based around this model is CiCi’s Pizza Buffet that offers a pizza buffet every day of the week for under $7 a person (without drink) at many locations.

Middle Eastern Buffets
Most Middle Eastern food is a perfect fit for a buffet concept; food can be prepared in large quantities, and performs well under food warmers. The cost of goods is also typically low, and many items can be used again and again across several different dishes.

Some of the low-cost food items can include different variations of rice, hummus, falafel, tabouleh, and kebab. To differentiate yourself you can specialize in a variety of different Middle-Eastern regional food like Lebanese.

American/Comfort Food Buffets
Though American-style buffets, offering things like turkey dinners, meatloaf, macaroni and cheese, and fried chicken have broad appeal, controlling food cost can be a little trickier in this kind of setup. While it’s always a good idea to surround higher-cost items with lower-cost, starchy items, there’s always the chance that an amateur eating competitor will come in and clean out your prime rib station. Plan for lots of pastas, potatoes, and other low-cost, high-calorie foods to offset the cost of your bigger ticket items.

Chinese Buffets
There are several reasons that Chinese cuisine works so well for a buffet restaurant. First, there’s the relatively low cost of ingredients, which can all be combined with inexpensive, flavorful sauces to help stretch food costs. But Chinese buffets are also typically employing a few additional subtle tricks, such as making you eat with chopsticks (to slow down eaters, allowing their bodies to feel fuller, sooner), loading up with rice and noodles (to fill stomachs quickly), and using teeny tiny plates so that customers can’t overload their dishes on their first pass through the line. 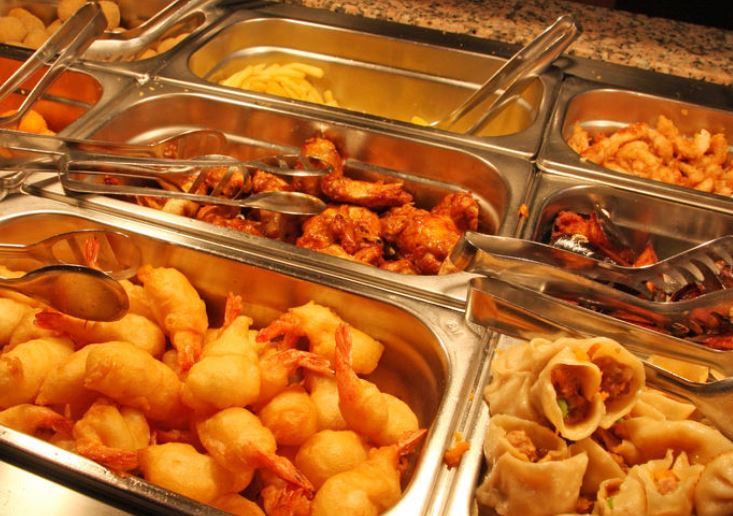 The Chinese buffet is an proven business idea.

Indian Buffets
These tend to be successful for the same reason as Chinese buffets: Relatively low food costs employing powerfully flavorful sauces, a wide array of uses for a typically narrow set of ingredients, and dishes that can be prepared ahead of time and in bulk by a very limited staff.

Italian/Pasta Buffets
Look: Noodles are cheap. Sauces can be prepared in mind-bogglingly huge quantities, and frozen until service. Best of all, most people who dine out for Italian food will probably also spring for a little of wine, and as anyone with a profitable restaurant will tell you, the food business is really more like and “alcohol business,” that also happens to serve food.

Soup/Salad Bars
Because in the restaurant business, vegetables are functionally free. There’s also significantly less preparation involved in this option too. Anyone with a half hour of training understands how to bring out lettuce, dressings, and other sides that are set out on a cooling station. Maintenance of the the salad bar requires slightly more labor on the management side, especially within the large trough of ranch. It’s almost impossible to keep that area clean!

Overall, the soup / salad bar model is a terrific approach even if you only intend to leverage this opportunity part time. One of the chains that use this model is Soup Plantation that also serves soups and pizza for customers in addition to healthy greens.

Breakfast Buffets
These work on a similar principle as pizza restaurants: Perceived value is very high, and anyone that loves breakfast will LOVE the idea of getting to have any kind of food they’d like. While breakfast foods typically carry very reasonable food costs, be aware that there is more of a service component to this type of buffet than others. After all, you’ll need cooks to make all of those hundreds of on-demand omelettes.*

*As a cook, I can tell you that even typing that sentence sent a nightmarish chill through my entire soul.

Fried Chicken Buffets
We love the idea of a fried chicken buffet restaurant. The perceived value is super high, there are lots of low-cost, starchy sides for customers to fill up on (like mashed potatoes, french fries, or pasta salad), chicken is relatively inexpensive, and let’s face it: How much fried chicken can a human being really eat in one sitting? That’s a rhetorical question. Unless you’re Colonel Sanders, no need to answer that question.

Of course the nationally recognized franchise Kentucky Fried Chicken (AKA KFC) recognizes the profitability of the buffet Monday – Friday during their lunch service. The buffet features unlimited helpings of their trademark recipe chicken and a variety of sides including biscuits, coleslaw, and mashed potatoes at most locations. 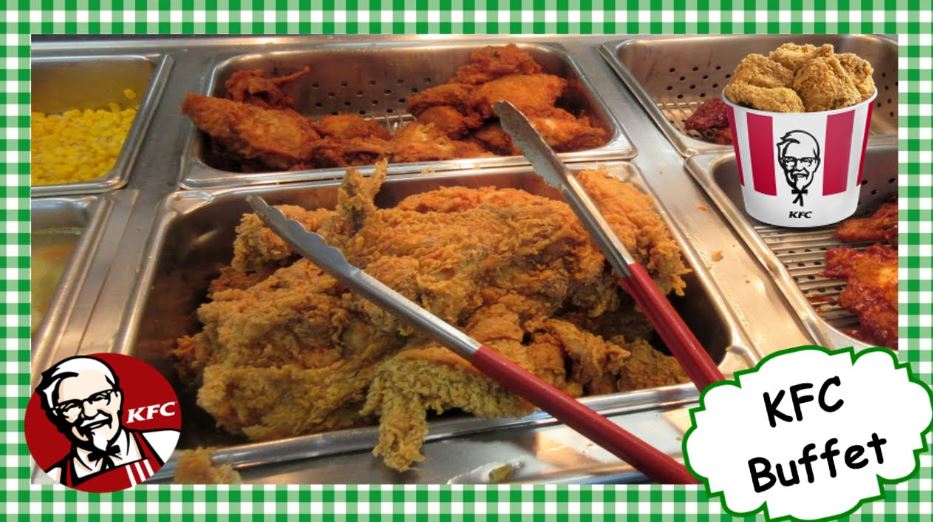 That’s a lot of chicken.

Mexican Buffets
Any buffet concept that allows for lots of “make it yourself” time on the part of the customer, plays into the strengths of this kind of restaurant. Meat, cheese, and tortillas can be arranged in countless ways, and the more time your customers spend time fussing around at the Build-Your-Own-Taco Bar, is more time for their bellies to tell their brains that they’re full. Alcohol sales can also be a positive contributor to your bottom line, in this type of buffet restaurant.

No matter which kind of cuisine you choose to focus on for your buffet business, you’ve probably noticed a few trends in the above descriptions. Look for foods that have a high perceived value, discourage waste, have lots of starchy, filling sides, and can be prepared in large quantities with a limited staff. Find ways to give your customers something to do that isn’t eating (like assembling their own tacos, or picking out ingredients for their own custom pasta creation), to slow down their caloric consumption, and where possible, find a way to shoehorn in some alcohol sales. Be creative! The next big thing in buffet restaurant ideas might be right in front of you.