The Top Five Best Food Trucks to Eat at in Fargo, ND

With a population of over 120,000, Fargo is the largest city inside the state of North Dakota. Pair the rising population with the major colleges, including North Dakota State University, you’ve got the backdrop of a more diverse spread of people than anywhere else in the state. In addition to more cultural and entertainment opportunities, Fargo is the food truck capital of North Dakota with more mobile food units operating here than anywhere else in the state.

In case you weren’t already blatantly aware, Fargo can get pretty cold and windy during the winter months. According to USClimateData.com, the average high temperature in January is 18 degrees F. It’s also not uncommon for temps to drop below 0 at night. As a result of these conditions, it’s not easy to find active vendors during winter months. If you happen to need a quality meal during the summer, however, you’ll find plenty of options within the city limits.

In this post, we rank the top five active food trucks or trailers that serve the city of Fargo. These rankings are in no particular order as assigning a number to each truck would be both unfair and highly subjective. Our formula for determining the top mobile eateries comes from a variety of data sources including online reviews, volume of local press, and our on-site testers that are on the ground trying the food. Here are our favorites of the Fargo area. 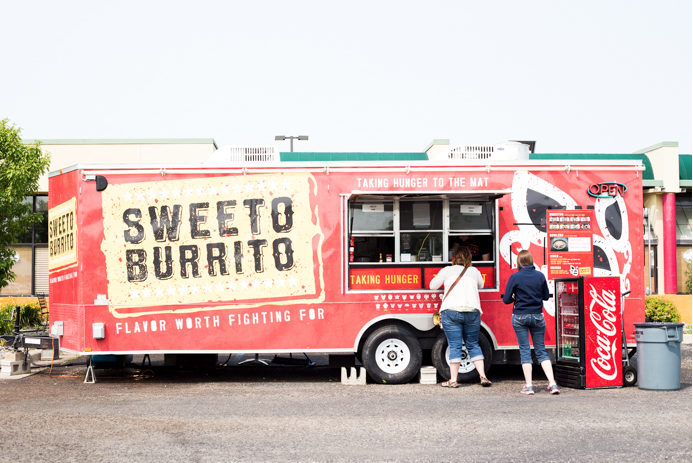 Sweeto Burrito is one of Fargo’s most popular trucks. Photo Credit: FargoMonthly.com

Sweeto Burrito Food Truck – What started as a single food truck in the oil patches of Western North Dakota during The Great Recession in 2007 has grown into a national franchise. Sweeto Burrito serves Mexican inspired food with a major twist. Popular menu items include the “Break Neck” breakfast burrito. Inside this shell you’ll find fresh cooked eggs, bacon, American cheese, Cilantro ranch, and the truck’s trademark Neato sauce. It’s an entire breakfast rolled up into one convenient package.

Of course you can’t go wrong by ordering the trademark Sweeto Burrito either. This menu item features sweet shredded pork, pepper-jack cheese, black beans, and neat sauce. Not only does Sweeto Burrito offer great food, but the story behind this business feels like it came straight out of a made-for-tv movie. After getting let go from a career in advertising, a friend suggests to one of the companies founders that they open a food truck in a Western North Dakota boom town. No more than 60 days later the first Sweeto Burrito Food Truck was born. 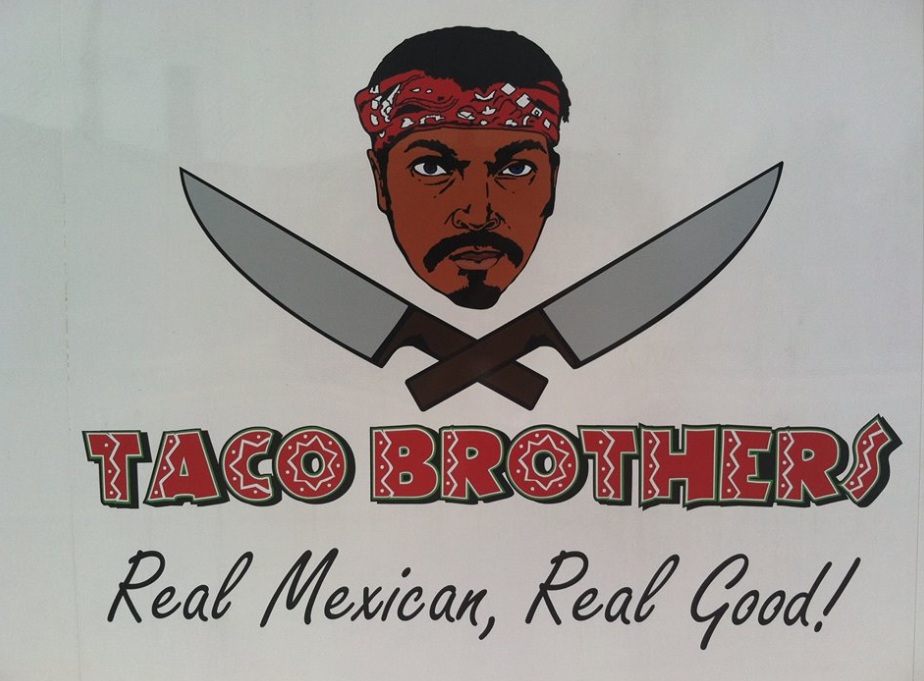 This is a very popular and beloved food truck in Fargo. Their Facebook page will soon pass 300 reviews and they get incredible volume of positive feedback from their ever growing customer base. In addition to entrees like Tacos Al Pastor and Mexi-Dogs this may be the only place in town you can get traditional Mexican sodas like Coca-Cola out of a glass bottle. 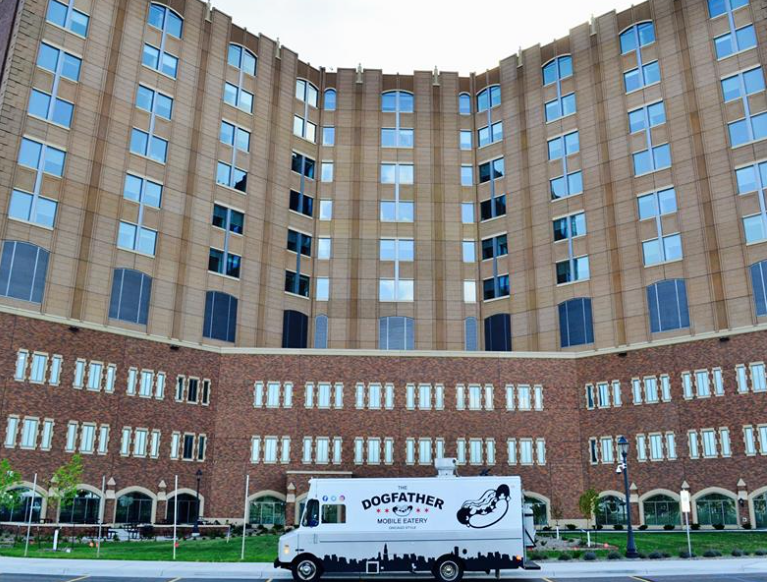 The Dog Father in action.

The Dog Father Mobile Eatery – You can’t be sad eating street meat according to this mobile eateries official website. We would have to agree! If you’re stuck in Fargo and in search of a Chicago-style hot dog this is the only place to find a legit one. These dogs are so legit in fact that ingredients are shipped directly from Chicago on a weekly basis. Nice touch!

Menu items include the Maxwell, which is a Polish sausage with grilled onions, peppers and mustard on a poppy seed bun. Remember no ketchup if you want real Chicago style! Another popular option is The Windy City, featuring a Vienna beef hot dog topped with chili and diced onions on a poppy seed bun. 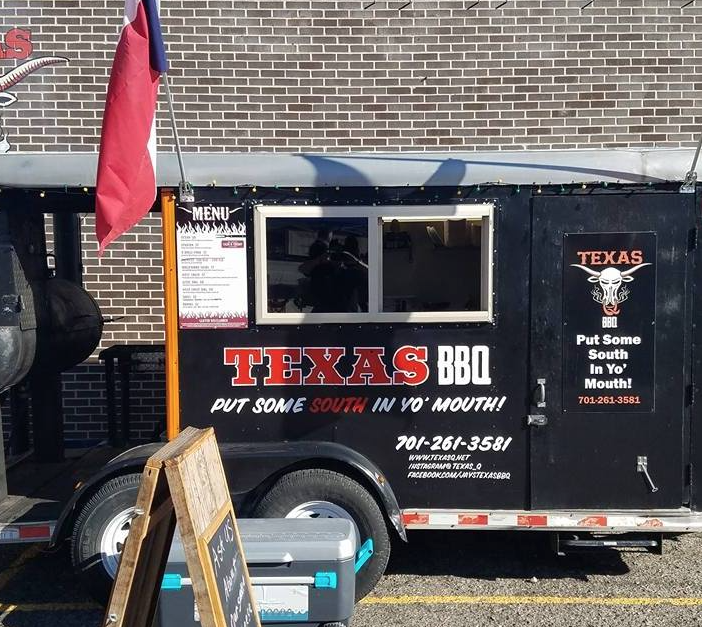 Texas Q BBQ and Catering is ready to serve you.

Texas Q BBQ and Catering – Looking for Texas style BBQ up North? Your search begins and ends with Texas Q BBQ and Catering. When visiting this truck you’ve got to try the signature “Texan.” This is a brisket sandwich that’s smoked for twelve hours and infused with their secret marinade. If you’re in the mood for something a bit more adventurous try out the Bison Thunder Dog that spotlights a 1/4 all-beef hot dog with sautéed onions, jalapeños, garlic aioli sauce, and two ounces of pork. 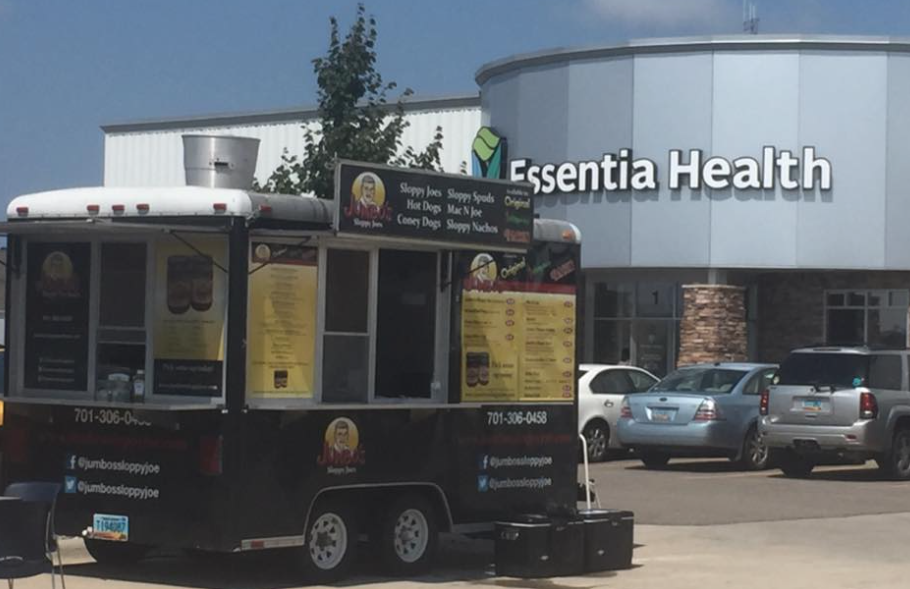 Believe it or not, Fargo has vibrant food truck scene, especially during those warm summer months. If you’re visiting between June and August be sure to check if the annual Fargo Food Truck Festival is being held at that time. In 2017, this event attracted over 8,000 foodies over a single weekend and is a phenomenal opportunity to taste everything the Fargo food truck scene has to offer in a single location.