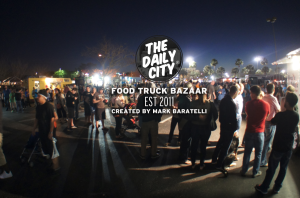 Although Baratelli has received recognition by media and transformed his passion into a full-time business that helps spotlight local food and art, just a few short years ago Baratelli was hosting tiny events for just a handful of people with little fan faire. One such meet-up was called Taco Truck Taste Test where a few people would come together to sample local ethnic foods that were often overlooked by the residents of the Orlando community.

If you’ve ever wondered what it takes to organize an food truck event that people want to attend or just learn more about the evolution of the mobile food scene within the Orlando area, check out today’s interview. As always, thanks for listening and supporting the podcast! 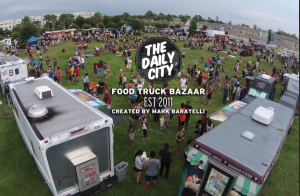 The Daily City – A blog covering the arts and culinary scene in the Orlando area. Mark Baratelli has covered the Orlando beat for years and is still going strong.

Part 2 of Mark Baratelli Interview – Catch the rest of this conversation over at the MR-Trailers.com blog. Part two contains more advice about organizing popular food truck events and insights into the future of the ever evolving food truck industry.

Mark Baratelli in Culinary Hall of Fame – A feature of Baratelli published in the Orlando Sentinel.

Fund This Campaign – Nick Ferrin needs your help raising capital for his Mongolian Food Truck that will operate in Salt Lake City, Utah. There’s only a few hours left to contribute to this campaign so act fast! Even if you can’t contribute please share on social media to help spread the word.