How To Start a Food Truck in San Antonio

Dreaming about starting a food truck in San Antonio? There’s probably not anyone better to learn the ropes from than Chris and Kate Conger, owners of Smoke Shack BBQ. For the first four years of the business, the couple served their unique spin on BBQ exclusively out of their truck. Today, they’ve realized their own dream of owning a restaurant located at 3714 Broadway St. 78209. Check them out if you happen to be visiting or live in the area.

In today’s post, Chris Conger was kind enough to provide detailed responses on how he and his wife got started in the food truck business in San Antonio along with some tips for being successful here.

Chris: The Smoke Shack has been operating in San Antonio for about 5 years now. My wife and I moved to San Antonio in early 2010 and looking to do something in the restaurant industry. After working in the industry for quite sometime my dream was to always open up my own restaurant. Being from Dallas that was where we wanted to open up first, but after traveling around to different cities we saw the demand for different restaurants and bars. So, we decided to move to San Antonio. 1. Because we both have family here and 2. We wanted to stay in Texas since we had been out of the state the 6 years prior (5 years in Oxford, Mississippi and 1 year in New Zealand). Well it was the best move we could have made!

I started working in a BBQ restaurant when we first moved here and handled the catering. It was not long after that my stepfather found a trailer with a huge pit on it outside of Ft. Worth. So him and mom helped me buy it for $750 and using all the old lumber and barn wood on their property we started building a mobile kitchen without any plans on what we were building or doing. I would drive up to Stephenville on my days off and we would work on the trailer. Originally we thought it would be a catering vehicle but as we were in the middle of building the food truck scene started taking off. When we finished I drove it to San Antonio did some research about what permits we needed, got it licensed, and started searching for a place to put it. 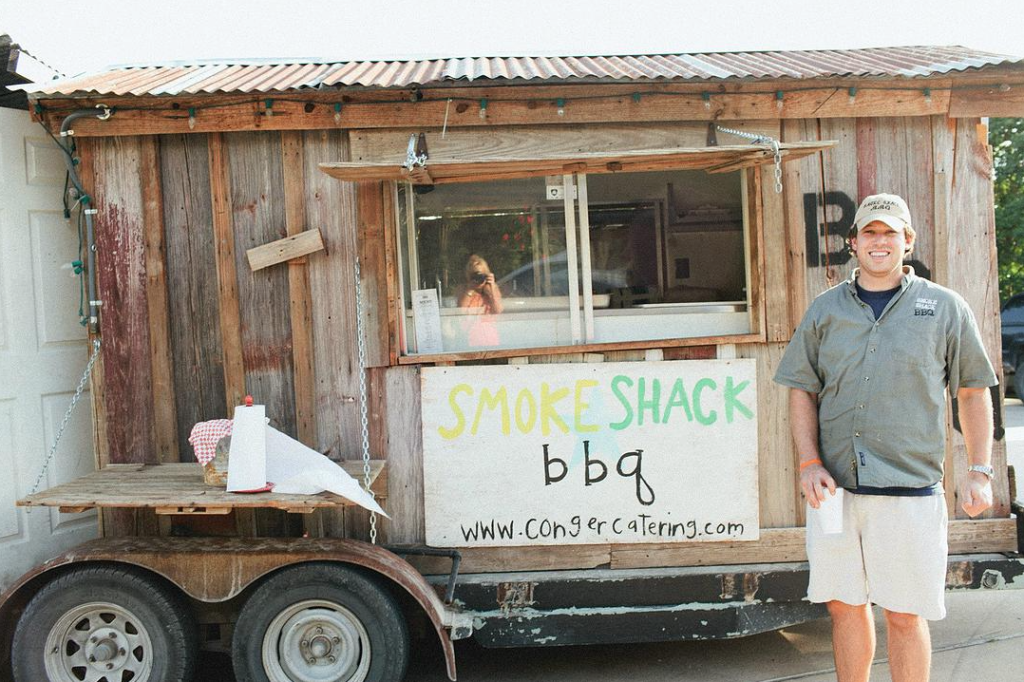 Smoke Shack BBQ in all its glory.

What was it like to start a food truck in San Antonio?

Chris: Starting a food truck wasn’t as difficult back then. I called the Health Department, they told me to look online at the criteria for opening up a Kitchen on Wheels. Everything you need to know should be in the Health Department handbook. It has now grown and gotten more extensive due to the fact that there are way more trucks and trailers on the road than in 2010. With more trucks means more problems and situations. We were one of the first 5 trucks to operate in San Antonio, as far as the new generation of trucks is concerned. The taco trucks here have been operating for quite sometime but they were mostly late night food or construction site searching. I didn’t know anybody else that was in the food truck business. I had heard about a BBQ truck in Austin called Franklins and heard that he had quite the following. My buddy Mason who helped build my trailer went up to Austin with me one morning to go check out Franklins. It was about 10:30 am when we got there and there were a couple people standing around. So we joined them at the gate and then at 11am the line that we started got up to about 50 people. I tried to ask Franklin a couple questions while he was slicing my order but it was too hectic and he wasn’t able to talk long. But it was good to go up there and check out his operation.

That being said it just fueled the ideas. I am definitely one with an imaginary mind. My wife being the more logical of the two would play the antagonist so we would stay up so late planning what we were going to do and how to do it. What it came down to was setting up on a busy corner with a lot of traffic, putting signs up so people knew who we were, what we were selling, and the hours that we would be there. The first day we opened was the craziest day ever! We had just finished the recipes that we were going to use for our sides that morning at 2 a.m. and got up at 4 a.m. to start our first day of business. It was more crowded then I would have ever imagined. Then the next day came and we did it all over again. We stayed in that same spot so our customers didn’t have to drive all over town to find us. The Clientele kept growing and the word of mouth kept spreading.

Now in San Antonio there is an organization called SAFTA (San Antonio Food Truck Association) who can help get new truck owners started. They have lists of places to go and sell your product ranging from companys or buildings from 100 people to 5,000 people. SAFTA has since acquired the downtown spots and many other places all over S.A. The Best way to get started is to try and find someone that already has a truck to help with the layout/function (most important) of the truck. They can also tell you what food sells itself and what doesn’t.

What are some of the challenges you face as a food truck owner?

Chris: Their are challenges everyday. It has the same problems that a restaurant has just a much smaller scale. You are still going to have the equipment problems. You will have truck/trailer problems, and you will definitely have staff problems. If your not organized and on top of your game then you will have problems. Any problem such as keeping your folder for the Health Dept. somewhere you wont lose it because they will check everything from commissary trips to when your last inspection was. Also if you don’t know how much propane you have in your tank or gas in your generator you could be out at a gig and run out of either which means you don’t have lights or you don’t have gas to cook food. It will happen once and then after that you better not let it happen again. 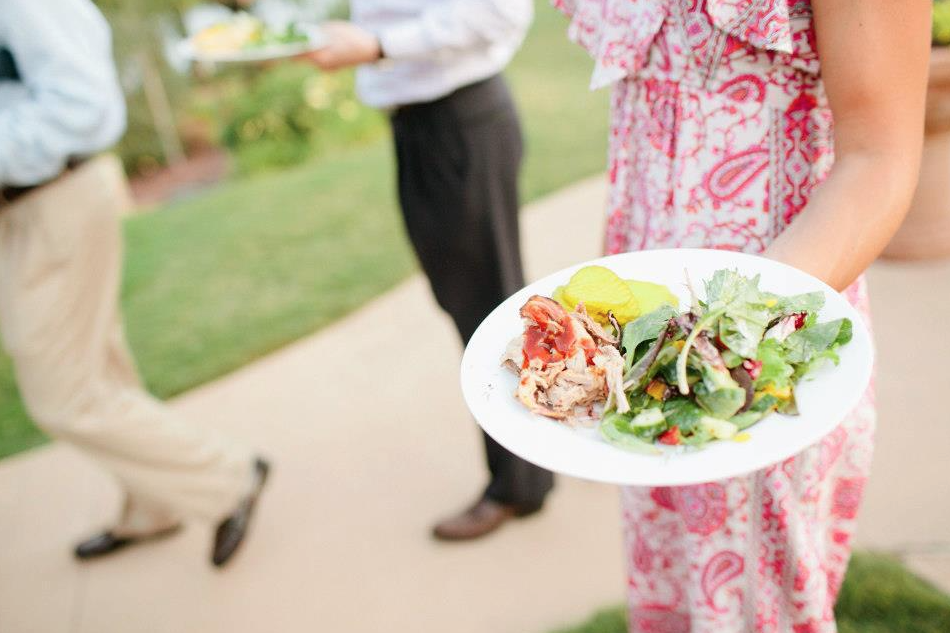 People rely on you for a service you provide so if you fail them they will probably not come back. My biggest fear is disappointing customers. I try very hard to give everyone my best foot forward. Sometimes its just one of those days, and if it is then you need to make them happy. Every customer appreciates a little something for free. If its not your best product then don’t sell it. One day I didn’t like how my briskets came out. That day got turned into a customer appreciation day. I chopped all my briskets up and gave away sliders till I ran out of food. I Served about 200 people free food.

Thank you so much for your time. Any parting pieces of advice?

Chris: A food truck is designed to be quick and easy. If you can’t get your food out quick, don’t open a truck.  Also If you can drive a trailer then open trailer. The old trucks will give you more problems than you can handle.

Smoke Shack BBQ – Smoke Shack started off as a BBQ food truck, but now has a permanent restaurant location. If you happen to be visiting the San Antonio area, be sure to stop by owners Chris and Kate Conger’s place to sample their chopped brisket or Frito pie.

Food Truck Court – One great way to determine whether or not full-time food trucking is right for you is to go where the trucks are and observe what a regular day in the life would be like as a vendor. While your at the Port of San Antonio give some of the local food trucks a try.

San Antonio Food Truck Association – One of the best ways to set yourself up for success is to meet and network with other food truck owners. Association members will be able to guide you and provide advice on how to be successful in this market. It’s the closest thing to the fast track that we know about.

Ultimate Guide to San Antonio Food Trucks – Learn about some of the mobile food vendors already operating in the area.

Business Plan – Still serious about getting started? One of the best first steps you can take is to write a business plan and develop your road map for starting a business.