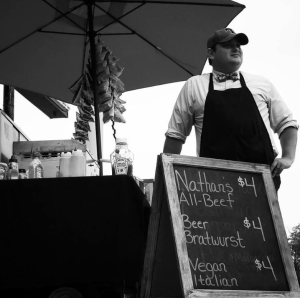 Welcome to Season 2 of the FoodTruckEmpire.com podcast, where we will be following along hot-dog slinger Matt Gladfelter of Bow Ties and Hot Dogs based out of Knoxville, Tenn. During the course of this season we will be speaking with Gladfelter as he seeks to build his own hot dog business empire in addition to learning the process he used to start a hot dog cart business. We hope you enjoy this change in format from our previous episodes of the podcast and look forward to documenting this journey over the next few months!

Gladfelter’s career in the restaurant industry began early. At 16 his first job was at Wendy’s flipping burgers when he learned to love the “battle” that happened every shift. It was a challenge to get those burgers and fries out in and timely manner and was a place Gladfelter thrived. Before Gladfelter even graduated high school, he had already been promoted to manager and his career quickly progressed into his early 20s when he would go on to earn a good salary in chain restaurants like Cracker Barrel. Although the money was good, Gladfelter would regularly clock over 70 hours a week at these restaurants leaving little time leftover to spend with the family.

When his third child was about to be born, it really clicked with Gladfelter that he needed to explore other opportunities to make a living. Gladfelter also sensed he was missing some of those special moments with his older children. Then, his wife suggested looking into starting a hot dog cart. As you might imagine, Gladfelter was initially skeptical of a hot dog vending and if it actually had the potential to earn a decent living.

Although skeptical, Gladfelter began to research the topic of starting hot dog cart business across Google and YouTube and found a video about the pros and cons (video below) of starting a hot dog business from Ben at LearnHotDogs.com. The video was straight-forward and didn’t sugarcoat what it took to operate a hot dog stand. There’s a lot of hard work involved and you’ve got to get out and vend consistently if you want to make good money. But the video also articulated the benefits of the business, such as the low-barrier to entry financially, the little prep you need to do compared to other restaurants, and of course the potential for really respectable incomes.

The content of these hot dog vending videos made a lot of sense and Gladfelter become more serious about researching the business model.

It’s important to note that Gladfelter did not quit his job immediately after getting the idea to start a hot dog cart. Instead, he continued to work his restaurant management job while researching what it would take to operate this business successfully when he did decide to go full-time. Since Gladfelter has a family to provide for this made the transition from employee to business owner an easier one and put a lot less stress on himself.

In the audio of this episode, Gladfelter walks step-by-step how he went about writing a business plan and conducting competitive research within the city of Knoxville, Tenn. As you’ll learn in the interview, this was a critical component of differentiate his hot dog cart from other vendors in the area. In total, Gladfelter invested about 3-months of his time conducting the research steps outlined below.

Below are the four primary steps Gladfelter took in his business planning / market research process:

Online Research – Just like you might be researching a hot dog cart right now, Gladfelter was going through this exact same process just a few years ago. Nowadays you could probably learn how to become a brain surgeon by searching through a combination of Google searches and YouTube videos, but fortunately learning how to start a hot dog business is much simpler.

Some of the best resources that Gladfelter was able to find was a website called LearnHotDogs.com and videos from the owner of that website Ben. You can watch one of the videos below that Gladfelter found particularly valuable when researching his business:

Market Research Checklist – Most folks can handle doing a few Google searches and taking notes. But this is the research step that separates those that are truly serious about launching this type of business. Gladfelter took the time to make a list of as many hot dog vendors as he could find in within the city of Knoxville, Tenn., and then went out to visit each one. In total, Gladfelter visited nine different hot dog locations across the city. Although, Gladfelter knows there are many more hot dog vendors in the city now, this gave him the opportunity to see how other vendors were operating and made it extremely clear some things he wanted to implement and not implement in his future business.

As Gladfelter visited each vendor, often with his 6-year old son, he took simple notes in a notepad that outlined the things he liked and the stuff he didn’t like from each vendor they frequented. The things he liked would be incorporated into the operations of his future business. The things he didn’t like, he would ensure would not be happening on his carts. Here are a few examples of the positives and negatives that Gladfelter observed during his on-site visits:

Bad Stuff – Things observed that were not positive.

Blind Hot Dog Taste Test – The most important ingredient for any hot dog vendor has to be the hot dog or sausage being used. And Gladfelter put a lot of time and energy into making sure he was selecting the best tasting wiener for his business. To determine the top brand of wiener that would be served from his cart, Gladfelter held a little contest among his family and friends where he had people blindfolded and try 16 different tube steaks head-to-head to determine the best one. Gladfelter even setup brackets so the winning wiener would move on and the loser would be dropped.

It was important to do this blind taste test without any condiments so that the tasters would be focusing on the hot dog itself and not the condiments that can cover up the taste. Gladfelter was surprised that the hot dog brand he initially believed would win and have the best taste, immediately lost out to a generic brand of wieners. As a side note, only all-beef hot dogs were tested in this competition.

At the end of the day, Nathan’s Famous Hot Dogs brand turned out to be the best tasting wiener available and ended up champion. This was a huge surprise to Gladfelter, but the results of the blind taste test was clear. Nathan’s was a good choice from a cost standpoint for the business as it is competitively priced with other hot dog options. Gladfelter also mentioned that Boar’s Head produced an extremely high-quality hot dog as well that performed well in the taste test. However, Boar’s Head proved to be too expensive from a cost standpoint day-to-day and would force Gladfelter to raise prices on his cart. Still, Gladfelter will use Boar’s Head occasionally for special events or catering gigs.

In addition to the four steps outlined above, it’s important to mention that Gladfelter makes it a habit to carry around a notepad and takes diligent notes with this. These notes could be anything from new recipe ideas, prospective vending locations, to ways to cut costs or provide better customer services on the cart. When inspiration or a great idea comes, it’s important to have a place to record the thought so you don’t forget.

Hot dog carts have regretfully gained a bad name in some ways. And so I set out as my goal to ask, “How can we fix these stereotypes?” If I’m going to do this how can I fix this and bring a new image.  – Gladfelter describing the early market research phase of starting his hot dog cart.

Writing a Business Plan – Download our business planning guide to starting a food truck. Highly recommended before starting your own business.

LearnHotDogs.com – This is one of the first resources Gladfelter found about operating a hot dog cart as a business. This is a highly recommended website with hundreds of articles, podcasts, videos, and other content about starting and operating this type of business.

Boar’s Head – Another premium frank comes from Boar’s Head. This is another product that’s available at most grocery stores and scored well in the blind taste test.