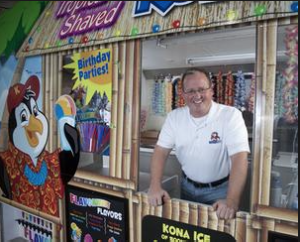 You’ve probably seen the Kona Ice truck serving their unique combination of shaved-ice flavors across your city in places like school fundraisers or other community events.  But what you might not know, is your local Kona-Ice truck is part of a red-hot franchise that’s been featured across major news outlets like CNBC and Fast Company due to the companies swift growth and the success of franchisees.

As Kona Ice has grown, they’ve been able to help raise and donate more money to local causes like little league teams that need money for jerseys, football that  and other causes. Due to low food costs a franchisee has the ability to donate 25% of sales from an event, which can add up to a significant amount of money small school program. Since the company was founded in 2007, Kona Ice has contributed over $25 million to a variety of local causes.

In today’s podcast we speak with the founder and CEO of Kona Ice, Tony Lamb. During the interview, Lamb shares early days of Kona-Ice when it was just a single truck operated by himself, how Lamb first got the idea to launch his first truck, and where the coming is heading in the future.

Tony Lamb on a CNBC Town Hall. Tony’s comments can be seen near the end of the short 3-minute video.

Kona-Ice.com – The official website of Kona Ice. Use the website to locate a Kona Ice truck in your area, learn how your local franchisee can help with your next fundraiser or event, and of course explore the different flavors of Smart Snack Approved shaved ice.

Own a Kona – Does Kona Ice sound like the type of opportunity you’ve been searching for? This website is the official source of franchise information for the business. You can watch a variety of instructional videos that explain the business model and learn more about the mission here.

How Kona Ice Expanded Beyond Summer – Article in the entrepreneurship magazine Fast Company about how Kona Ice franchisees are profitable even in winter months with a business that is traditionally thought of as seasonal.

Rapido GoFundMe Campaign – Aaron Wilson is seeking $2,000 to renovate and transform his RV into a mobile food unit. You can help him out through this link.