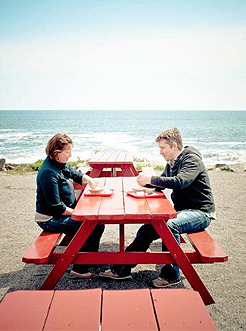 Malcom Bedell is at an interesting point in his Kickstarter campaign. So far, his campaign is over 66% of the way to reaching his goal of $25,000 so Bedell can purchase a food truck that will operate in Rockland, Maine. But with only 7 days remaining in the campaign, will Bedell be able to reach his goal and launch the food truck he’s envisioned for so long? Only time will tell. Fortunately, if you’d like to contribute to the campaigns there’s still plenty of time.

In today’s main course, Bedell shares his personal story that includes living abroad in a small Mexican village for about 4 years until returning to Maine where he grew up. After landing stateside Bedell and his wife decided to start a website where they shared photos and recipes of the food they began to eat in Rockland, Maine, a town of only 7,000 during the winter that swells with tourists during the summer. Fast forward four-years into building a food, photo, and recipe website FromAway.com, the website now receives over 100,000 visitors each month. Now, Bedell is ready to take the leap into his next culinary adventure: full-time food trucking!

In this interview Bedell shares his “secrets” to raising capital with KickStarter, what it’s like to run a popular food blog, and of course the sandwiches he hopes to bring the the residents and visitors of Rockland, Maine. All that and this week’s mobile food news is in Episode 59 of the podcast.

From Away – This is Malcom’s food / photo / recipe / review blog for Rockland, Maine. According to Malcom, they’ve published around 1,000 posts to the blog, which is an absolutely incredible amount of volume considering the high-quality of the content. Kudos!

Malcom’s Kickstarter Campaign – Learn more about Malcom’s ‘Wich, Please: Mobile Sandwich Truck. At the time of writing this post, the truck is over 66% funded with 7 days remaining in the campaign. Support Malcom while there’s still time.

Guide to Restaurant Payroll Challenges – Article on Paychex.com recommended by Alan Rodak that can help food truck owners determine how handle taxes with tips and how the IRS views meals that are provided to employees… All important topics for food truck entrepreneurs.

ROAM Conference – This conference for mobile food entrepreneurs in North America was held in San Antonio, Texas, this year. FoodTruckEmpire.com was fortunate enough to get feedback from the event from two of the attendees. Here’s what they had to say about the event that is tentatively scheduled to be held in Orlando, Florida, next year.

Overall I thought the event was a great place to network with food truck owners, and others in the industry. The conference is on the ground level with about 200 participants, but the event is ran professionally, and provided plenty of education breakout session opportunities. Bottom line though the knowledge, successes, and failures shared between participants is the real gold. – Joel Paprocki, owner of InsureMyFoodTrailer.com on his experience at the conference.

ROAM is a great place to learn from other business owners who are on the front lines of the food truck movement, as well as a chance to hear first-hand from industry solution providers. – Brian Erickson of Trucklandia describing the event.