Matt Fuemmeler went on a trip with his wife to South America and came back determined to start a food truck. After returning state side and doing more research Fuemmeler decided that he wanted something a little bit different than the traditional style truck. Eventually, he stumbled upon a vintage bus he discovered on eBay that fit his concept so he called the owner and decided to pull the trigger. Fuemmeler bought an airplane ticket from Albuquerque, New Mexico, to Seattle, Wash., and the plan was to drive the bus back home. But the journey wouldn’t go that smoothly.

On the trip home Fuemmeler’s bus would break down in Portland during rush hour… resulting in some coverage from the local news as he vehicle held up traffic. Later, he would experience tire problems in Needles, Calif., that would also slow him down. But eventually, Fuemmeler got his bus back to New Mexico where he and his brother begin the 3-month process of converting the bus into a bustaurant.

Tumblr Account – In this blog, you get access to the details of the story Matt shared on the podcast. You’ll find before and after photos of the bustaurant, along with images of the build process, and descriptions of the various electrical, welding, and woodwork obstacles that were encountered along the way. But after months of hard work, the Fuemmeler brothers had their dream bus.

Molly’s Crepe Escape – This is where Fuemmeler learned the craft of crepes.

SketchUp – Program used to make a 3D model of the bus.

The Boiler Monkey – Before Photo – Looks like a lot of work! 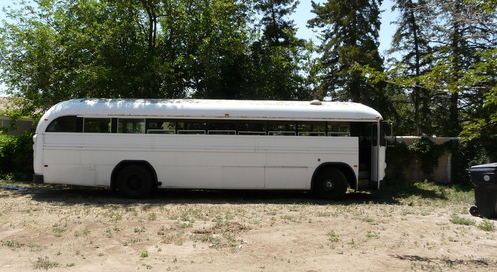 Don’t forget we’ll soon be doing a Q/A episode where I answer listener questions directly. Call 206.309.4660 to leave a question on our voicemail hotline.