As we get older, and look back on our own lives with a sense of nostalgic wonder, most of us can point to a few key moments that defined our sense of ourselves; those brief moments in a lifetime of accomplishment that will be talked about for generations by our children, and our children’s children, and their children after them. For me, that day came on April 23, 2011.

It wasn’t the day that I spent broiling in the bare blue skies of the hot Oklahoma sun, toiling under a tight deadline to get four houses framed for needy Habitat for Humanity families. It wasn’t the day that I forged an emotional connection with a young terminal cancer patient that crossed generational and cultural lines through our shared love of zydeco music. And it wasn’t the day that an impromptu leap onto a parade float during a whirlwind afternoon of high school truancy led all of Chicago to sing “Twist and Shout” along with me in perfect unison. Mostly because those things never happened.

No, instead, that fateful day in late April marked the first time I was able to successfully complete the “Blazin’ Wing Challenge” at Buffalo Wild Wings in South Portland, Maine. 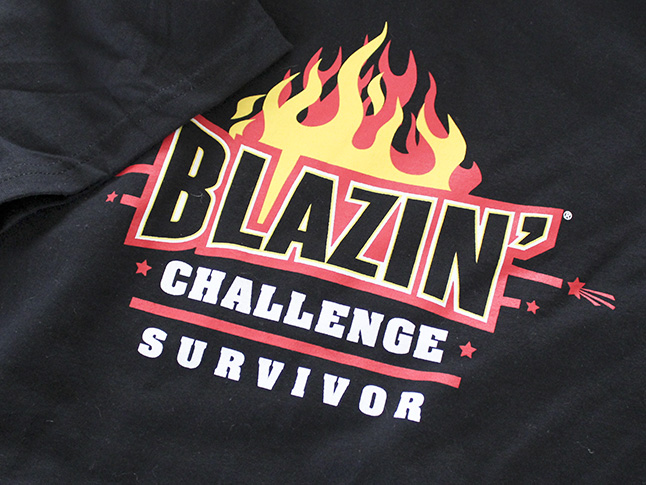 There are no winners. Only survivors.

What is the Buffalo Wild Wing’s Challenge?

A quick recap for the uninitiated: The Blazin’ Wing Challenge is a fairly straightforward spicy chicken wing eating contest, where for around twelve bucks, you get a steaming plastic basket of a dozen of the chain’s signature chicken wings, blasted in a heavy slather of “Blazin’” sauce, the highest level of heat available at Buffalo Wild Wings. Eat them all in under six minutes, and you’ll claim not just a free t-shirt, but your photo on the “Wall of Fame,” located somewhere between the overflowing busboy station and the bathrooms. But more on this, later.

As a society, our tolerance for spicy heat has spiraled ever-upward in recent years, with Flamin’ Hot Cheetos and ghost-chile dusted tortilla chips becoming common sights in the supermarket snack aisle. By these new standards of spiciness, the Scoville count of Buffalo Wild Wings Blazin’ sauce seems almost tame at around 300,000, which makes the sauce about 60 times hotter than a jalapeno pepper, or on par with straight-up liquefied habanero peppers.

The staff at Buffalo Wild Wings still treat this sauce with the respect it deserves; servers wear protective gloves, and stickers adorning orders of Blazin’ wings caution you to keep the sauce away from “eyes, pets, and children.”

The Rules of the BWW’s Challenge

Of course, like any well thought-out spicy food challenge, there are a few house rules you must obey, to be considered victorious. The first thing any prospective contestant must do is sign a waiver, absolving Buffalo Wild Wings of any legal responsibility in the event eating these wings causes you to start spontaneously vomiting, go blind in one eye, or begin communicating with the dead in an episode of pepper-induced auditory hallucination.

While the six-minute timer is running, you can’t have anything to drink to quench the fire raging in your mouth and throat. You can’t blunt the heat with any dipping sauces, such as blue cheese or ranch dressing. You can only use your fingers and your mouth to rend meat from bone, because forks are for the weak. You are forbidden from using your napkin, and for god’s sake, you aren’t allowed to touch your face.

Related Reading: How Super Batter Pancake & Waffle Mix Got into 15 Retailers in 6 months

When I close my eyes and try to conjure up the greatest moments of my life, it’s easy to call that evening into memory. When the challenge began, the first few bites were a breeze; I found myself wondering what all of the fuss was about, and why every single person on Earth wasn’t already sporting a souvenir Buffalo Wild Wings “Blazin’ Challenge” t-shirt.

After I breezed through the first six wings on my path to glory, things started to shift; the cumulative effect of all of that sauce caked on my lips and fingers (because remember, speed is a factor in completing the challenge here, as well), started to catch up with me. The spiciness of the sauce was starting to build, but hadn’t yet started to cause the biological shutdown of my olfactory senses I had been anticipating. These effects would begin to factor in at around the 8-wing mark.

With just four wings to go in the challenge, things definitely took a turn. I had somehow gotten wing sauce in my nose, which first flooded, then closed completely. My eyes, which had been squinting against my command and tearing only slightly, opened up and began rolling salty liquid down my cheeks. My face and hands were turning a bright shade of crimson, my lips felt like they had swollen to double their size, and a trickle of sweat ran down my spine. Only the small group of customers who had gathered around my table, cheering me on, helped me to power through the last few bites, and complete the challenge in 4:06, almost two full minutes short of the time allotted. 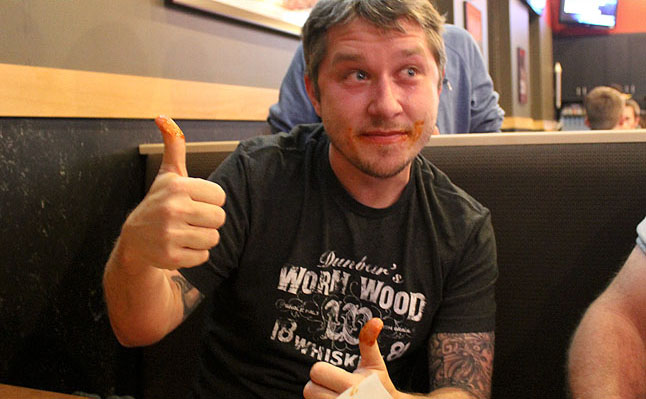 Our waitress, who had been watching from a distance, ran over to drop off two cartons of cold milk to dull the pain and grabbed a digital photo, my expression a grimace through a faceful of tears, my fingers blistered either through heat or capsaicin burns. The moment would only be memorialized briefly, however; I only learned after I had completed the challenge, that the so-called “Wall of Fame” was really just “B-Dubs” displaying my photo on one of their 200 wall-mounted televisions, for a few moments. Sigh. Fame can be so fleeting.

In the time since I completed this challenge, I haven’t participated in many more “hot food” eating contests. As I’ve gotten older, my tolerance for spice and pain seems to have gone down, probably in parallel to my desire to prove my virility through heroic feats of chicken-wing-eating. I’ve received hundreds (Thousands! Tens of thousands!) of comments and emails from readers online, most of whom wanted to let me know that either a) I was being a wuss, or that they b) shattered the contest in a quarter of the time that I did.

One high school-aged girl even wrote to ask me for an interview for her school, because she was planning to undertake the challenge herself, and her assignment was to solicit the help of an “expert.” An expert just like me. She wanted to know if I had any tips for tackling the challenge or even, hush hush, any ways to potentially cheat. And I have a few.

While Buffalo Wild Wings explicitly forbids the use of ranch dressing or blue cheese dip during the challenge, they don’t restrict the amount of food you order before you make the decision to forge ahead with the contest and destroy the intricate inner workings of your digestive system, since presumably, the likelihood of your participation tends to increase in proportion to how many hundreds of ounces of draft beer you’ve already consumed. But after all of these years, I’m ready to reveal how I emerged victorious on that fateful night in April, ten years ago.

Right before completing the challenge, I drank an entire cup of ranch dressing from a previous order, letting the buttermilk and mayonnaise roll around in my mouth for as long as I could stand before swallowing. Why? Because capsaicin is fat-soluble, not water soluble (which is why you drink milk after eating something spicy, instead of, say, tequila).

My theory is that, by coating my mouth and throat with a thin layer of life-giving fat, it prevented the fire from the spicy wings from settling into my soft tissues; it wasn’t until I was more than halfway through the challenge, that I began to really feel the burn. While it’s not technically in violation of the letter of the rules, it probably goes against the spirit somewhat, so proceed according to your own moral compass.

BWW’s corporate… If you’re reading this now. Please don’t make me give back my t-shirt!

Since completing my own challenge a decade ago, here are tips shared online from those that completed the quest more recently. Here are some of the best tips I wish I would have known about.

Don’t come on an empty stomach: I covered my mouth and throat with buttermilk mayo prior to the challenge. That seemed smart, but you’ll want something to coat and protect your stomach lining too. Eating wings this hot can result in epic stomach pain. It may seem logical to come hungry to a food challenge, but don’t do it for this one.

Build a tolerance for heat: Some of the threads I’ve read online take you through the process of becoming better at eating spicy foods over time. The basic advice is to gradually eat spicer and spicer foods a few weeks in advance of the challenge. This will help you build a tolerance for hot foods. I never took this advice myself, but you could.

Wipe buddy: As mentioned earlier, the wing sauce burns your mouth, tongue, fingers, and lips. So basically everything it touches. If you can ask a friend or significant other to wipe your face with a moist towelette it will make enduring this challenge a little easier. Best of luck on your own challenge! I’m rooting for you.

Malcolm Bedell is co-author of the critically acclaimed "Eating in Maine: At Home, On the Town, and On the Road," as well as the junk food-centric Spork & Barrel and Brocavore, a blog focusing on street food culture and cooking. His contributions include Serious Eats, Down East, L.A. Weekly, Bon Appetit, The Guardian, and The Huffington Post and his food truck, "'Wich, Please," was named "Hottest Restaurant in Maine" for 2015 by Eater. Check out my restaurant Ancho Honey on Facebook.